NFTs are mainstream now with the wide adoption in not just the non-physical art industry - but also in fast-food industry.

McDonald’s and Pizza Hut entered – several fast-food giants have openly embraced NFTs and are creating digital assets to be sold or distributed in various marketing campaigns. This mass adoption of NFTs from one of the biggest commercial industries has opened the doors for NFTs to become popular among communities that were earlier unaware of the digital assets.

As more and more fast-food giants join the NFT wagon, others are forced to accommodate this change and introduce their digital assets as NFTs. To that extent, thousands of NFTs were recently released from well-known giants such as Burger King, McDonald’s, Pizza Hut, and Taco Bell.

While these are the first to join the blockchain revolution, other popular brands such as Dominoes are sure to follow suit. Here are a few of the NFT assets released by fast-food giants.

McDonald’s China – the only fast-food restaurant chain yet to launch an NFT collection of 188 NFTs in last October. These NFTs were distributed in a giveaway on the franchise’s 31st anniversary of eyxistence in China. The NFT token called the “Big Mac Rubik’s Cube”, and was designed looks like of McDonald’s Shanghai headquarters.

Burger King is one of the largest global burger joints, with its headquarters in Miami-Dade County, Florida. Las tmonth the burger joint recently entered the NFT sphere by creating a digital token, “Keep It Real Meals”. The digital token is paired with several NFT collectibles in a marketing campaign, that will be offered along its new line of Celebrity Meal Packages.

Burger King’s customers can get their hands on these NFT collectibles by purchasing “Keep It Real Meals,” which features famous artists such as Chase Hudson, Larissa Machado, and Cornell Haynes Jr. To win the collectible, the customer must scan a QR code on the meal and have a chance to earn one of three collectible game pieces. On collecting all three, the customer will win a digital collectible with a year’s supply of burgers and a one-on-one call with the celebrity.

Last year, Taco Bell launched an NFT collection called “Taco Art” on Rarible. The collection combined illustrations of the most selling menu items, and was sold for up to ten ETH. All the proceedings from the NFT auction were donated to charity. 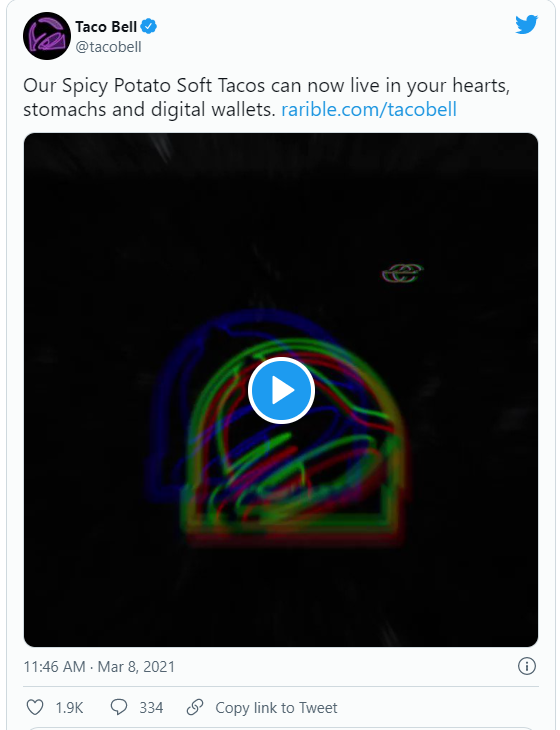 Pizza Hut is one of the world’s most famous pizza fast-food restaurant chains. Pizza Hut Canada launched its NFT as a “1 Byte Favourites” project – the NFT contained digital images of nice pizza slices, and the NFT holder was given instant access to Pizza Hut NFTs on Rarible.

Image by Shutterbug75 from Pixabay

Marcia is a real crypto fan, specialized in bitcoin and NFT news.

BudBlockz To Open Private Sale To Members Of The Public

Go Around the World with 1xBit and Win Crypto!

Don’t worry, we hate spam too